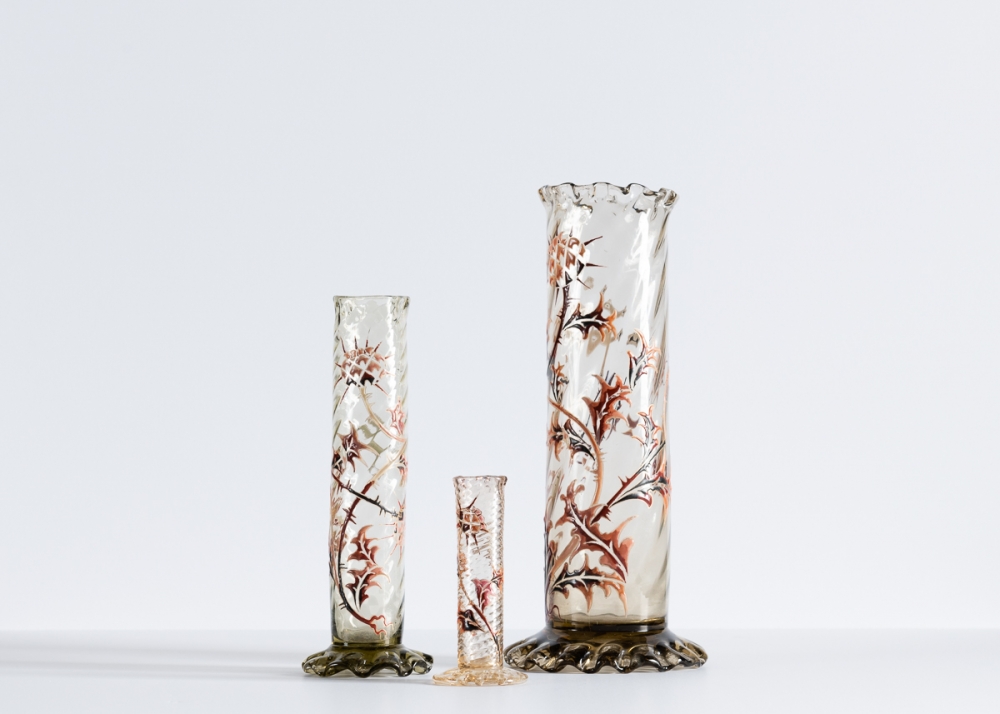 An icon of the French Art Nouveau movement, Émile Gallé fostered a prolific career through his experimental techniques and intricate designs. Gallé’s body of work draws inspiration from the designer’s academic background of botany, art, and philosophy. Working at the turn of the 19th century, Gallé manifested his distinctive naturalistic motifs in art glass objects and wood furniture, which propelled him to international recognition.

Born in Nancy, France to a successful faience and furniture producer, Gallé was exposed to the world of French design early on in his life. Gallé not only leaned on this familial connection to learn traditional glassmaking at his father’s factory, but he also sought out museum exhibitions around Europe that exposed him to enamel and glass techniques originating from the varied cultures of East Asia. These explorations would later inform the influences of Japonsime to appear throughout Gallé’s oeuvre.

Upon returning to in France, Gallé began to make early creations with enamel on clear glass. After taking over his father’s factory in 1877, however, he elevated his experimentation by incorporating this enamel with inlays and etched cameo glass. Within some of his pieces, he would also carve or embed a poetic verbal expression to lend an air of mystique. Presenting these new works at the Paris Exhibition of 1878, Gallé gained critical acclaim and received the Grand Prix award.

In 1894, Gallé established his own glass manufacturing plant in his hometown of Nancy and, with the help of a dedicated team of designers and craftsmen, began to develop original designs; these designs were executed by his team and then approved by Gallé. At the facility’s peak, Gallé oversaw nearly 300 workers, reflecting a union of the revival of craftsmanship of the time and the rise of mass production to manufacture crafted glass.

Continuously innovating, Gallé employed the techniques of acid etching, casing, and wheel cutting to produce his illustrative glass works. He also incorporated special elements such as metallic oxides and deliberate air bubbles into the forms, deeming the finished works marqueterie de verre, or marquetry of glass.

Together with other figureheads of the Art Nouveau movement—namely Antonin Daum, Louis Majorelle, Victor Prouvé, and Eugène Vallin—Gallé co-founded an Art Nouveau movement in 1901 called École de Nancy, or The Nancy School. Here, he found opportunities to collaborate with his peers, such as Majorelle, to produce furniture designs.

Based on the Rococo period, Gallé’s furniture pieces feature richly toned woods and luxurious metals to render constructive points with an organic flair. These works were carved and inlaid with different materials to wondrously illustrate the flora and associated insect life found in Nancy and the surrounding areas. In a fashion parallel to his glassworks, he inlaid poetic expressions into some of these furniture pieces, drawing from contemporary Symbolist writers such as Maurice Maeterlinck and Paul Verlaine.

Outside of the factory, Gallé stood as a proud humanist, seeing his role as an artist as being linked to a greater good in society. An active participant in the Radical Party, he was involved in organizing evening schools for the working class community in Nancy and vocally supported the Irish Catholic nationalists, the Armenian national liberation movement, and the civil rights of Romanian Jews. Though Gallé unfortunately met an early death due to leukemia in 1904, his legacy continues on through both the institutions through which he produced his remarkable designs and the contributions he made to his communities. 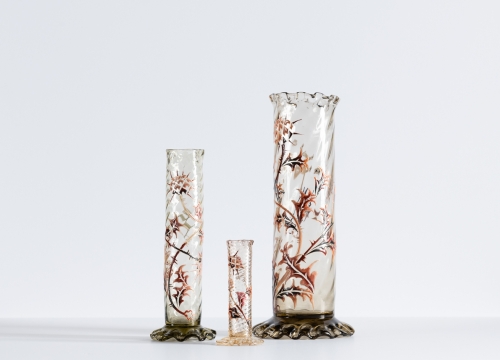